By October 1898 the main issue was the location of a new granary.  Mr. Smyth-Richards felt that it would be better to build it at the west end of the existing building and for the old chaff house to be utilised for the dynamo and accumulators.  He was worried about interfering with the old walls of the existing Carpenter’s Shop as they “are not calculated to carry heavy weights or bear the jarring of machinery.”

It had been more than a year now since George Smyth-Richards had raised his concerns about the water wheel and Garnish and Lemon had produced their report and estimates.  As 1898 drew to a close George Smyth-Richards appeared to be seeking to bring these discussions to a conclusion by setting out what he proposed to do.  His previous suggestions of a new saw mill south of the river, and of new barn at the west end of the existing buildings, had not been accepted but a plan that is consistent with what was actually built appears eventually to have emerged. 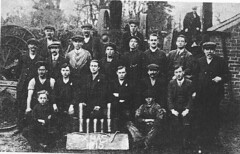