While working at Simonsbath Sawmill Den was not only involved in the full range of estate carpenter tasks but he also was responsible for the water supply to Simonsbath House and other properties in the village.  This came from Ashcombe Water via the water-carriage that ran through Ashcombe Woods.  This now-disused leat was built into the steeply sloping western side of the valley and required considerable routine maintenance.  Until 1898 the leat also fed a mill pond north of the sawmill which supplied water to a water wheel at the mill.  This function ended when a water-carriage system was installed to bring water from the River Barle to serve a newly-installed turbine at the mill.

Sadly, Den began to suffer from ill-health and on 8 December 1992 he died at the Royal Devon and Exeter Hospital, aged just 62.  His ashes were spread in his beloved Ashcombe where a commemorative plaque was erected.  Den's widow, Doreen, stayed on at Diana Lodge Flat but in 1994 moved to a Fortescue Estate Cottage close to the Castle Hill mansion in Filleigh. 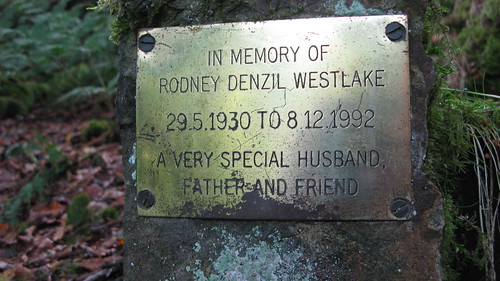