In August 1952 torrential rain cause catastrophic flooding on Exmoor.  Thirty four people were killed in Lynmouth and 420 were made homeless.  Flooding caused severe damage in Simonsbath too and led to the installation of a diesel engine at the sawmill.

The flooding caused the River Barle to break its banks and the river cut a new channel away from the Barle Weir.  The water-carriages were no longer able to bring water to the turbine that had powered the mill for the previous 50 years.

As a temporary measure the Fortescue Estate used a tractor to drive the lineshaft at the mill and then a Tangye engine.  In December 1954 a Ruston Hornsby diesel engine was installed and has been used to power the mill ever since.

The engine was purchased from Gliddons of Williton, Somerset on 3 December 1952. The delivery was apparently delayed by heavy snow at Blackmoor Gate. It may have come by rail to Barnstaple and thence by road.

Ruston & Hornsby Ltd. was formed in 1918 when Ruston, Proctor & Co. Ltd. of Lincoln bought the firm of Richard Hornsby & Sons Ltd. of Grantham. 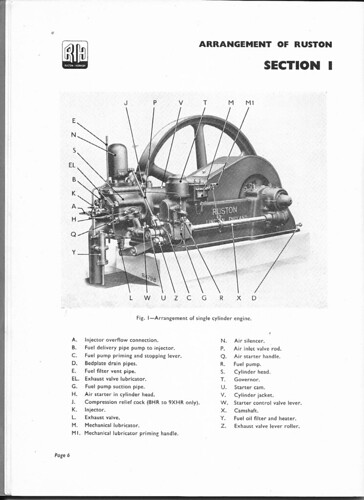